Tendring Top-ups was the name given to the occasional magazine issued to Tendring CAMRA members when Tendring formed part of the Colchester & North East Essex Branch. This corner of the site is designed to keep the dream alive. Remember - it's not a Blog it's a Top-up. 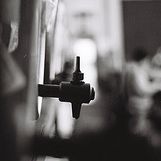 Having skipped a beat in 2015 the heart of Winter Ale was going strong and back in Harwich in 2016 as Derek Birchall reports:

What a difference a year makes. Last year, after many months of hard work by the festival committee, at the last minute, it was discovered that we were going to be unable to use our regular venue, the Kingsway Hall in Dovercourt, for the arranged Beer Festival and after much head scratching and brainstorming it was decided that with regret the 2015 Harwich & Dovercourt Winter Ale Festival would have to be cancelled, not a decision taken lightly but unfortunately it was out of our hands .. read more .. 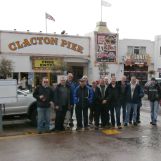 RambAles have become popular events for Tendring CAMRA and this is the story of No. 3 by the man with the map, Ed Loach:

The day finally arrived. I arrived at the designated assembly pub, the Old Lifeboat House, not really knowing how many people would turn up. I was guessing perhaps 10 based on the names I'd remembered to write down, and on the previous two walks that we had done in 2012 .. read more .. 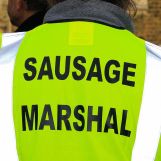 Lateral thinking has always been a great strength of Tendring CAMRA. Who would think of campaigning for Real Ale by throwing a sausage up West Street? Richard Oxborrow reveals all:

Imagine the scene in the New Bell in Harwich when our Publicity Officer walked into a beer festival meeting and found the Harwich Winter Ale Festival organising committee talking seriously about throwing sausages. The year was 2011 and although no minutes would back this up - the subject had been discussed before .. read more .. 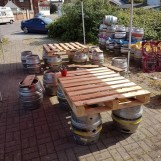 Let's Do the Time Warp Again: The Harwich Ale Trail

Christopher Jones, Mast of the Mayflower did it, so did Samuel Pepys, Daniel Dafoe and even Queen Elizabeth I. Travel back using friendly Harwich pubs as your time machine and be excellent to each other ..

Sometimes really good things are born of adversity and when the Harwich & Dovercourt Bay Winter Ale Festival was cancelled in 2015 the terrible prospect of a run-up to Christmas without the calming influence of a large selection of real ale and cider was very real .. read more ..

From the crucible of National Pubs Month 2012 brainstorming emerged this quirky and campaigning event. The concept is simple - you pack a coach with a Morris side and lots of drinkers and tour top Tendring taverns to rejoice in the delight of singing, dancing, drinking and chatting with the locals. Mick Hearn waves his hankie and explains everything ..